As mentioned in a previous post, it was decided very early on that regardless of bubs gender we wanted a My Neighbor Totoro themed nursery, its one of my favourite animated movies and I loved the idea of filling the room with Totoros, toadstools and other woodland wonders.

We decided to use something more like this as our inspiration, using wall decals that we can easily take with us should we move.

Even though we rent, I wanted the room to be colourful so we have painted it with Dulux Melon Sorbet, originally I wanted a pale sagey green for the walls and this is slightly brighter but I love it now as its much brighter for my little one and feels like more of a childs room. 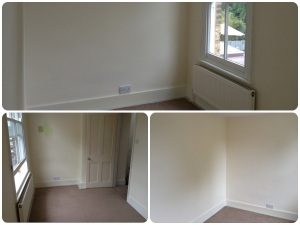 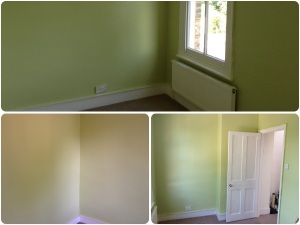 After a lot of hard work and a few lengthy projects the outcome was this: 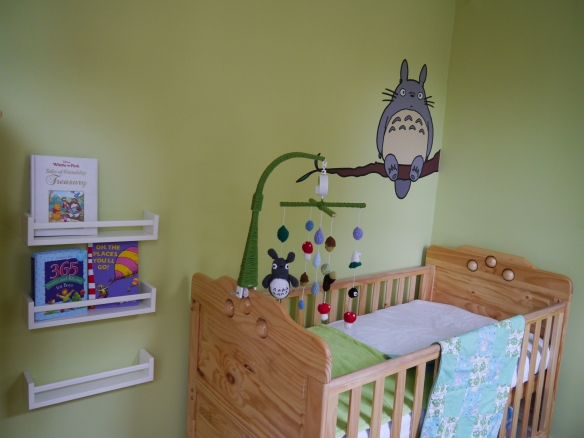 We brought the large colour Totoro wall decal on Etsy, I made the patchwork blanket using Totoro fabric found on Spoonflower, my Gran helped to make Bub’s one of a kind Totoro Amigurumi mobile, and we painted Ikea Spice Racks with satin paint to create forward facing bookshelves. 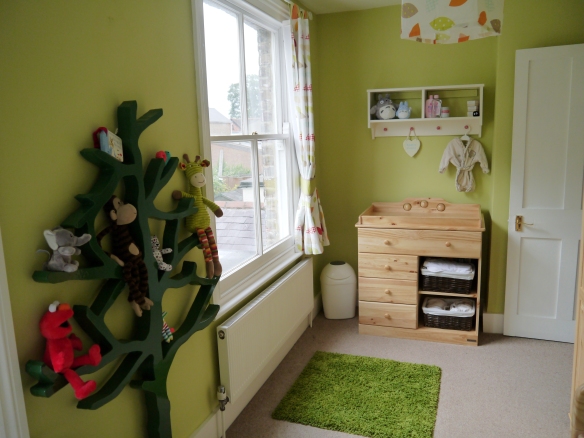 We made the Tree shelving ourselves. 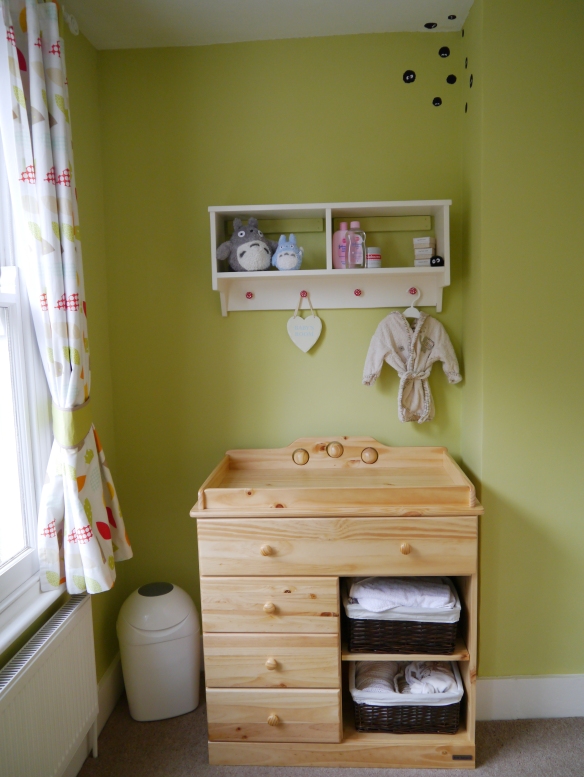 We also made the shelving unit above the changer, and we printed soot sprites on to vinyl decal paper ourselves and stuck them up in the corner of the room. 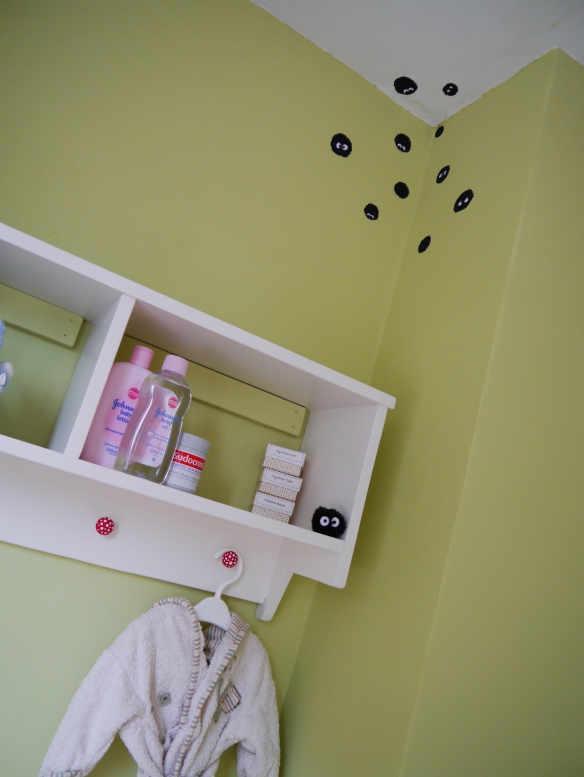 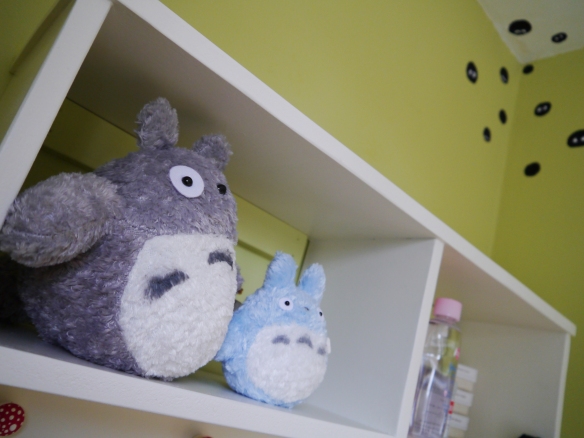 We are so happy with the outcome, its perhaps not as Totoro heavy as I’d have liked but living in the UK options are limited without paying large shipping costs from Japan, but hopefully over time we can add a few more bits and bobs that come up on Ebay or Etsy.

All the room needs now is for its new resident to make his appearance, hurry up Bub, we are so ready to meet you!!!

You can see all of my posts about creating Bub’s Totoro Nursery here!

As soon as we started trying to get pregnant, it was decided that whether Boy or GIrl, our Nursery theme would be My Neighbor Totoro. It’s one of my favourite animated films and I love the idea of nature being important to my little one, so the opportunity to make a nice foresty themed Totoro nursery where Totoro could possibly be joined by a range of woodland animals, seemed perfect.

As I planned and pinned away my inspirations for Bubs room, it became apparent that being in the UK, choosing a Japanese theme may not be the most convenient and cost effective choice…however, my Gran had already crocheted an amazing Totoro mobile for us (post coming soon) and I really did love the idea, so I decided I would just have to use some workarounds.

So when I found this amazing Totoro print fabric on Spoonflower and discovered that they only charge $2 for postage to the UK, it was decided, instead of spending a lot of money importing a blanket from Japan, I was going to make him a one of a kind, patchwork Totoro blanket with my own two hands…..once I found a way to cut the fabric to size and sew the blanket seeing as it had been 12 years since I last touched a sewing machine.

I checked out Pinterest for inspiration and tutorials suitable for a beginner, my post on my inspirations can be found here and as mentioned in that post the tutorial I ended up following is this one. And also sourced the rest of my fabric:

This cute one from frumble.co.uk

and this plain fabric from plushaddict.co.uk

One of my best friends is an avid sewer so I recruited her, along with her rotary cutter, mat and ruler and we spent an afternoon cutting all the fabrics to 5”x5” squares, then I borrowed my Nan’s ”vintage” (read super old!) sewing machine, laid out my squares in the right order, took a picture to follow and got to work following the steps of the tutorial. 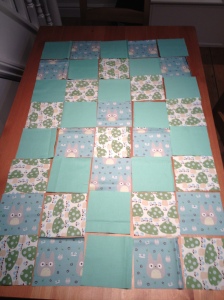 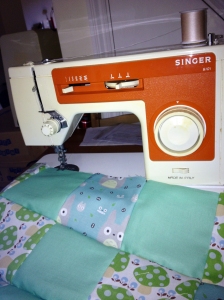 My blanket is 5 squares by 8 squares, so about 40”x25” give or take a bit due to my inexperience at sewing seams of the same width, my squares don’t line up perfectly and sewing the strips together got messy, but I don’t care as once it was all put together, it looked great and I was super chuffed with myself, it only took me a few hours and I was eager to find some backing material so that I could finish it off. 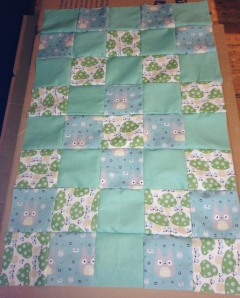 I decided to get a fleece throw from Tesco for the backing material and found one that was the perfect colour, I cut it down to size, pinned it; right sides together, to my patchwork and got to work sewing a 1/4” (ish) seam, leaving one corner open so I could turn it right way out. 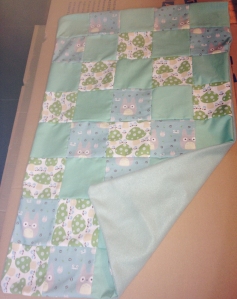 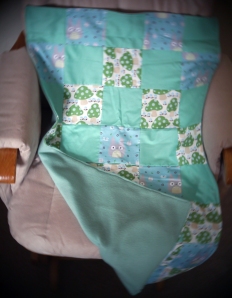 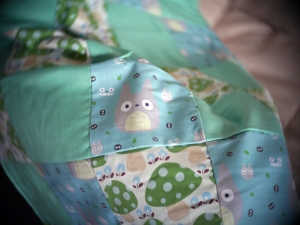 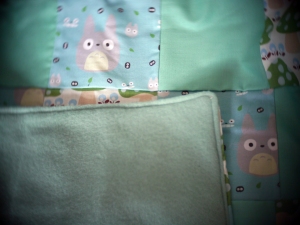 I am so happy with the way this turned out as it was my first sewing project in years, and I have developed a new obsession with patchwork blankets and next plan on turning all my old gig shirts into a rag t-shirt quilt before starting work on another blanket for bub. I have my eye on this adorable Soot Sprite print fabric, just need to find some other fabrics to go with it.

We are starting the Nursery this weekend, so stay tuned for a before/after style post and also that post about the amazing crocheted mobile that my Gran made for us…here’s a sneak peek. 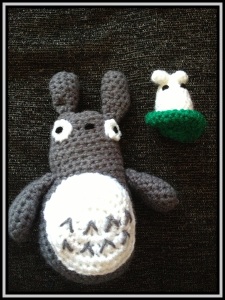 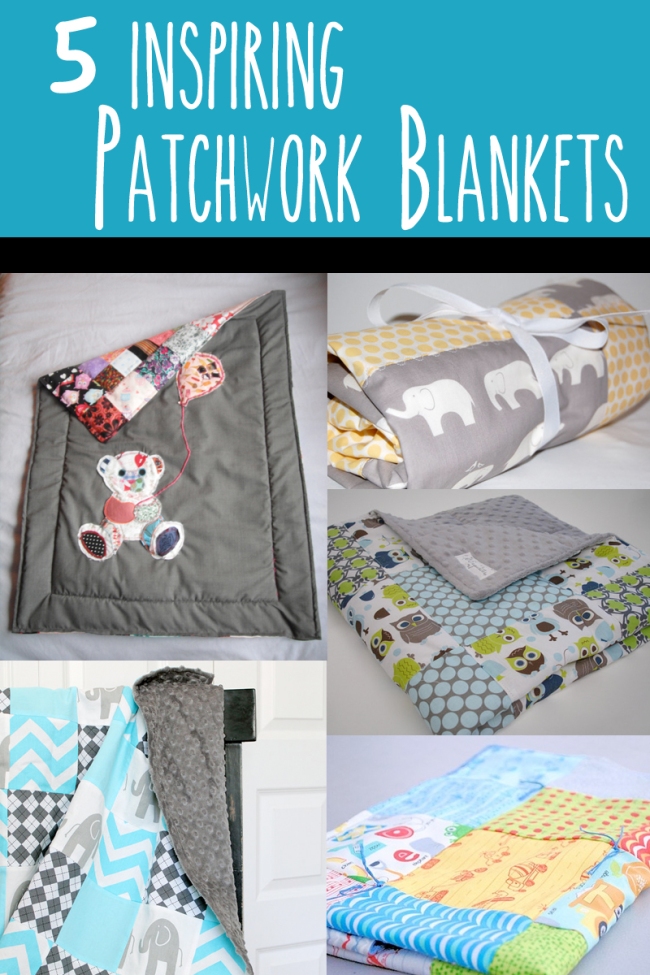 So that My Neighbor Totoro Patchwork Baby Blanket post is coming! But in preparation I thought I would share 5 of the Patchwork Quilts I came across on Pinterest that inspired me to give it a go as my first big sewing machine project.

1. One of many beautiful patchwork quilts made by Gemma and featured on her blog. Amazing that the first one was completed by hand, I don’t think I have the patience for that, but some of the lovely details added to her blankets make me wish I did. 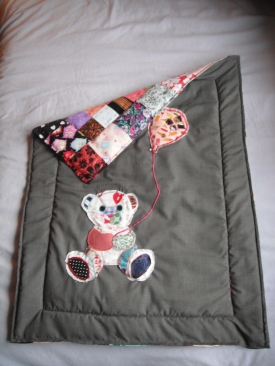 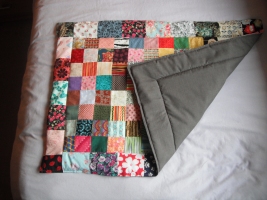 2. This gorgeous Yellow & Grey Elephant Blanket from LittleNecessities on Etsy

3. This bright and cosy looking blanket from KBExquisites on Etsy.

4. More Elephants from GiggleSixBaby on Etsy

5. And finally the tutorial I followed for my patchwork quilt. The steps were nice and clear and the only thing I changed was using fleece for my backing rather than Minky Dots fabric, although seeing how cosy the blankets above look when made with Minky Dots I think I will treat Bub once I’ve gathered enough patchwork fabric for the next blanket I make for him.

What has Pinterest inspired you to give a go?